In 1997, Mary Ellen Clausen’s family was in crisis: the older of her two daughters was facing a long road of treatment after being diagnosed with a serious eating disorder. Clausen, at the time the vice president of sales & marketing at Custom Logo Inc. (asi/173176), felt helpless. These were the pre-internet days and resources were hard to come by. 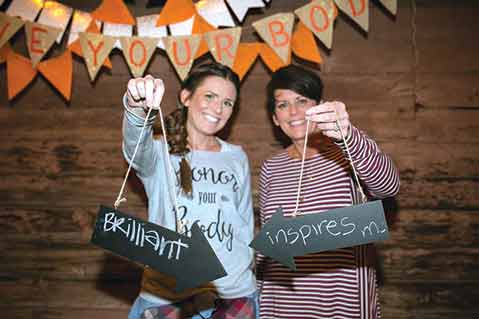 Four years later, Clausen’s younger daughter was also diagnosed. “It was all-consuming,” says Clausen, who at the time was balancing the demands of her full-time job with Custom Logo in upstate New York with helping her daughters get well. “They went to programs in Pennsylvania, Wisconsin and Arizona, and I thought, ‘How can we as a family heal if they’re not in the same state?’”

Over two years of laboring to find consistent, local care for her daughters, Clausen got to thinking: If they were struggling so much to find resources, how many other people were experiencing the same thing? So she took out an ad in the local Pennysaver offering a free informational clinic at an area health-care facility. Seventy-five people showed up. “We knew right away there was a need that was going unaddressed,” she says.

Clausen sought out eating disorder experts to identify gaps in care, and established her own resource to meet a need. Lamar Advertising, one of her clients at Custom Logo, donated a billboard. “I put my personal number on it, and the day we unveiled it, the phone started ringing like crazy ,” she says. “There was no turning back. I quit my job, filed for a 501(c)(3), and took a leap of faith.”

Starting in one classroom-sized facility, the organization, named “Ophelia’s Place,” steadily expanded into a 900-square-foot building, then to 4,500 square feet in 2005. “We named it after the character in Shakespeare’s Hamlet,” says Clausen, now the founder and CEO. “Ophelia suffers from a mental disorder, ends up being jilted and then drowns herself. I like to think that if she was real and alive today, we could help her.”

Today, Ophelia’s Place is a resource for eating disorder education, support and outreach, fielding calls from across the country. “Often, it’s a family member who has failed everywhere else,” says Clausen. “We collaborate with providers nationwide. We offer case management, which is so important. It’s medium-level, consistent care, so when someone comes down from higher-level treatment, they’re not on their own. It’s a safety net.”

As Ophelia’s Place brought in a steady stream of patients, Clausen knew there was an elephant in the room still to be addressed: the relationship between eating disorder sufferers and food. In 2009, the organization established the Café at 407 in Liverpool, NY, a farm-to-table restaurant open to patients and the public that offers a fresh, healthy menu. “It’s a beautiful environment where we try to change the perception of food,” says Clausen. “I tell our staff that they’re more than just a barista or a baker. They provide a safe place for people receiving treatment.” Of course, after her years at a distributorship, Clausen knows the importance of branded promotional products to market an organization’s services. Ophelia’s Place offers apparel, art prints, totes, mugs and jewelry, with uplifting messages such as “Every body is beautiful” and “Honor your body.”

“Body image messages are everywhere, and it’s very confusing,” says Clausen. “We have to shift the conversation. It’s not about weight loss; it’s about getting nutritionally, physically and spiritually healthy.”